Heat Wave Continues as Some Residents Clean Up from Winds 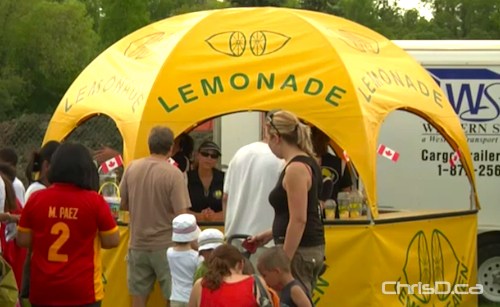 Strong overnight winds had many Winnipeg residents cleaning up fallen branches and downed trees in numerous parts of the city on Friday.

The hardest hit area appeared to be St. Vital, where the City of Winnipeg says over a dozen dangerous tree calls were reported.

Crews were out Friday cleaning up the mess, which was mainly focused to St. Vital, but a few calls for cleanup also came in from Transcona and St. James.

If the wind didn’t inconvenience you, the heat likely did. Environment Canada issued a humidex advisory for southern Manitoba, and by 5 p.m., the temperature was still sitting at 30°C, but with the humidity, it easily felt hotter than 40°C.

The intense heat this weekend is such a concern, Manitoba Health issued a heat reminder late Friday, reminding citizens to stay inside or under shady spots whenever possible, limit physical activity outdoors, and to stay hydrated. That lemonade stand above is the place to be right about now.

The long range forecast doesn’t provide much hope for cooler weather, as the next five days are predicted to bring similar conditions in the high 20s.

But who can really complain about this scorcher of a forecast when our spring was dampened with heavy rains and less than seasonal temps.