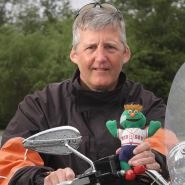 A 47-year-old Boston accountant who was diagnosed with ALS (Lou Gehrig’s Disease) 18 months ago, is leaving Winnipeg today on a Harley in support of a special charity ride.

Doug Oakley has always had a passion for motorcycles; owning a Harley Davidson for the last 11 years. When he was diagnosed with ALS, he soon realized he had to live his dreams as quickly as possible.

Oakley is embarking on a cross-country tour in hopes of raising $100,000 for Boston-based ALS organization Compassionate Care, ALS Canada and provincial ALS groups.

Harley riders will join Oakley this morning for a send-off as he departs from Harley Davidson of Winnipeg, 1377 Niakwa Road East at 9 a.m.