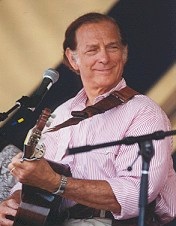 The legendary host of the first Winnipeg Folk Festival will grace the stage once again on Friday.

Oscar Brand had the duties of hosting the festival back in 1974, and 37 years later, he’ll make his return.

Brand is an engaging storyteller with a life-long love of folk music. For the past 36 years he has hosted more folk festivals than he cares to count, and for 65 years he has hosted Folksong Festival — a radio show boasting a longer life than any other like it.

At 90-years-old, Brand is a prolific singer-songwriter with dozens of albums to his credit, an Emmy Award-winning television producer, and avid traveller.

The public can get a chance to ask Oscar Brand questions during a Q&A session conducted by Mitch Podolak, one of the founders of the Winnipeg Folk Festival. The session will take place from 1 p.m. to 2:15 p.m. on Friday at the Folk School.

Oscar and his folk legend nephew Josh White Jr. will perform together on Snowberry stage on Friday afternoon from 4 p.m. to 5:30 p.m., and again on the Bur Oak stage on Saturday from 11 a.m. to 12:15 p.m.