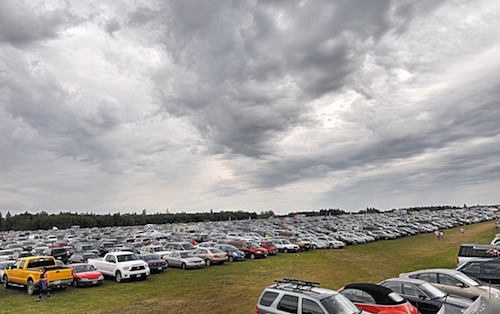 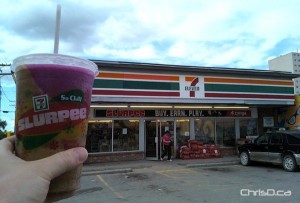 That’s not a dealership lot you’re looking at above, but the parking situation at the Winnipeg Folk Festival on Saturday. Hopefully no one forgot which aisle they were in.

A brief spurt of rain in the afternoon didn’t bother the festival-goers at Birds Hill Park. They’re a hardy bunch of folks.

No rain is forecast for today, and you won’t be seeing those ominous-looking clouds either. Environment Canada is calling for sunny skies and a high of 23°C. Perfect weather to line the parade route to see Jonathan Toews and the Stanley Cup. Speaking of Toews, the Winnipeg hockey superstar will officially get a lake named after him this morning before the other festivities around the city begin.

But you may want to slather on a little sunscreen before you head out there, as the UV index will be 7 or higher.

Can’t take the heat? It just so happens to be July 11 — which is 7-Eleven Day. The convenience store chain is handing out free Slurpees today to celebrate crowning Winnipeg the Slurpee Capital of the World for the 11th year in a row. Now that’s a title we can all drink to. Cheers!