Home » News » Magna Carta on Display to the Public at Legislature

Magna Carta on Display to the Public at Legislature 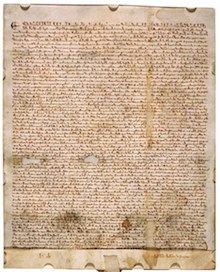 Beginning today, the public can get an up close look at the famed Magna Carta currently on display at the Manitoba Legislature.

The province is making the rare document available for viewing seven days a week from noon to 4 p.m. until Friday, October 8 in Room 200.

On July 2, the province acquired the Latin document on loan.

The Magna Carta is considered by many to be the first significant influence on the modern concept of human rights. The original document was drafted in 1215 and there are 17 copied originals surviving from the 13th century. Manitoba received one of four original issues from 1217.