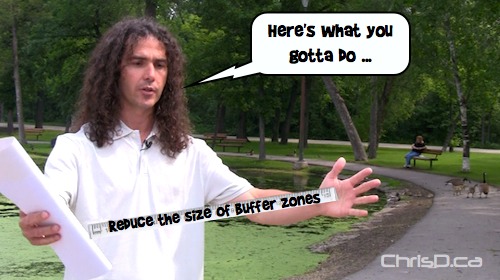 After a review was called on the city’s mosquito control policy in June by Mayor Sam Katz, the results are in.

The Executive Policy Committee will consider recommendations in a report penned with the help of city entomologist Taz Stuart to amend mosquito control.

The City of Winnipeg is asking the province to make changes to the provincial pesticide-use permit — a permit that has remained the same for the last 30 years. The amendment also calls on the province to reduce the size of buffer zones, reduce the 48-hour public notice for fogging to 24 hours, and amend the criterion for fogging from three days to two days.

The city also wants additional funding to complete fogging faster by using more manpower. This would decrease the time it takes to fog the entire city to two to three nights instead of four to five. Tighter rules are also suggested to verify a homeowner who requests a buffer zone actually lives at the residence in question.

And finally, the city suggests moving towards a 100% biological control for larviciding by 2012, which is two years earlier than planned.

EPC will consider the recommendations on Wednesday morning.