Woman Dies After Being Hit by Vehicle on McPhillips Street 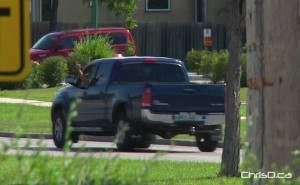 A 46-year-old woman was killed Thursday morning after being hit by a vehicle on McPhillips Street at Templeton Avenue.

According to witnesses on scene, the woman was crossing McPhillips in the crosswalk when she was hit by a Chrysler Pacifica crossover at around 8 a.m.

Police blocked northbound and southbound traffic while investigating the accident.

Motorists were diverted through the McDiarmid Lumber parking lot, where a blood-stained sidewalk could be seen in front of the store.

The victim was taken to Seven Oaks General Hospital in serious condition, where she succumbed to her injuries.

Police set up barricades at the crash site, but had to jump out of the way when a motorist almost drove through them just before 10 a.m. That’s not all police were dealing with — an irate driver tried to drive the wrong way down a nearby street to get around the accident scene. When police informed him he couldn’t, he flipped them the bird. Click the photo on the above left to enlarge.

UPDATE: July 18 — Police have charged a 41-year-old woman with criminal negligence causing death in connection with this accident.