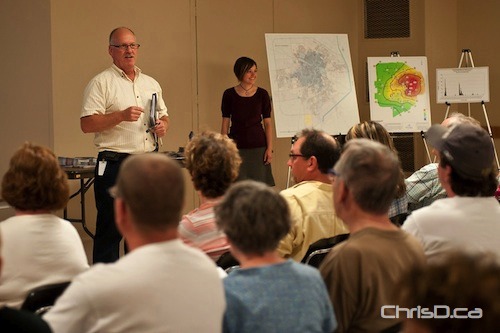 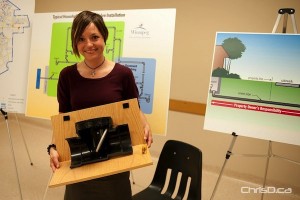 Dozens of frustrated city homeowners affected by flooding in late May (photos, video) gathered Wednesday night at an open house at the Gateway Recreation Centre.

Representatives from the City of Winnipeg and Province of Manitoba were on hand to discuss Disaster Financial Assistance and the impact of heavy rain on the city.

Dozens of residents packed the room to hear from officials and collect information on preparing their homes for a future flood event.

Randy Hull, the city’s emergency preparedness coordinator, and Cynthia Wiebe (left), wastewater collections planning engineer, spoke to the public on measures you can take to protect your property. One of the most popular suggestions was to install a sewer backwater valve.

At one point during the evening, the discussion became heated as homeowners forced to pay tens of thousands of dollars to repair their flooded-out basements began shouting at officials over who should be responsible for the cost.

Fortunately, there were no reported incidents of fisty-cuffs breaking out.