Child’s Dream of Visiting Legoland Near Reality at Stampede 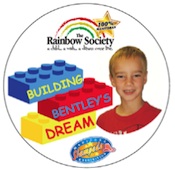 The Rainbow Society is helping an eight-year-old boy from Morris, Manitoba during this year’s Manitoba Stampede, by raising enough money to eventually send him to Legoland in Denmark.

Bentley has had to live with a heart condition that has given him a completely different childhood experience from the average child. For the first couple of months of his life, Bentley called the local hospital home and over the years has had to receive repeated procedures to stabilize his condition, flying back and forth in and out of the province to get the procedures done, experiencing more than any eight-year-old should ever have to experience.

During the Stampede, which runs from July 22 to 25, the Rainbow Society will be selling Lego blocks for a minimum donation of $2.00 each to help Build Bentley’s Dream. Each purchased block will be used in a Lego mosaic that will spell out Bentley’s name; which, when completed will mean that his dream will become a reality.

“After hearing Bentley’s story and knowing he was part of my own community, I knew that the Manitoba Stampede had to get involved,” said Manitoba Stampede general manager Malissa Dreger Lewis. “Bentley has touched the entire Stampede family and we are very proud to do our part in helping the Rainbow Society make his dream into a reality.”

More information on the Stampede itself is available at ManitobaStampede.ca.