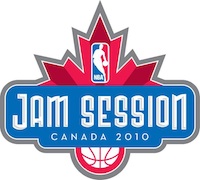 An interactive basketball festival is touring six Canadian cities this fall, including a stop in Winnipeg.

NBA Jam Session will travel the country bringing free basketball activities to fans of all ages and skill levels. From August 21 to October 10, the festival will travel from Halifax to Vancouver and will include appearances by NBA players, legends and mascots.

Saturday’s activities include a performance by a world famous Harlem Globetrotter, a free photo for each fan with the Larry O’Brien Trophy, a NBA Fit clinic to teach attendees how to get in shape, dancing instruction from NBA dancers and a measure up stations that give fans a chance to compare height, hand size and shoe size with NBA players

Sunday will bring a full day 3-on-3 tournament. There is a $60 entry fee per team and fans can register on the NBA Jam Session website. There will be four age divisions: Under 12 will be co-ed, followed by separate male and female divisions for players ages 13-15, 16-18 and 19 and over. The winners of the 19 and over tournament will win a trip to Toronto for the National Finals at Air Canada Centre during a pre-season Toronto Raptors game.

Registration is on a first come, first served basis and will open July 23 at 9 a.m. CT

Other stops on the Canadian tour include Halifax, Montreal, Calgary, Vancouver and Toronto.

To find out which NBA personalities and dancers will be appearing in each city, visit Facebook.com/nbajamsession.