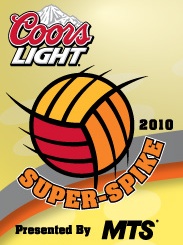 This year’s Super-Spike volleyball tournament set a record for money raised to support the National Women’s Volleyball Team based in Winnipeg.

Over 500 games of volleyball were played at Maple Grove Rugby Park, with ten different bands and various DJs performing.

“Super-Spike has again lived up to its track record of being one of the best weekends that this city has to offer,” said volunteer organizing committee chair Greg Paseshnik. “We are thrilled with the event’s continued growth and record registration numbers again this year, and are looking forward to an even bigger record breaking event next July.”

Next year the outdoor volleyball tournament will be celebrating its 10th anniversary.

← Previous: Marlins Pick Up Wes Long from Winnipeg Goldeyes Next: Last Chance to Take a Trip to Italy and Mexico →
Tags: Super-Spike | Volleyball