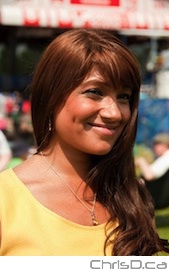 ChrisD.ca has learned Pole is heading back to her native city of Vancouver and will work at the CBC bureau out there beginning in September.

Her new duties will include a mix of reporting and hosting.

Aarti first came to Manitoba in August 2007 from Terrace, B.C. where she was a videojournalist, radio reporter and anchor for a CBC-affiliated station.

“I’m totally going to miss the lovely people here, but I’m thrilled to be going home,” Aarti said in an e-mail late this afternoon.

Her last day on the air in Winnipeg will be Thursday, August 19.