Home » News » ‘Save the Beer Snake’ T-Shirts Hit the Market

‘Save the Beer Snake’ T-Shirts Hit the Market 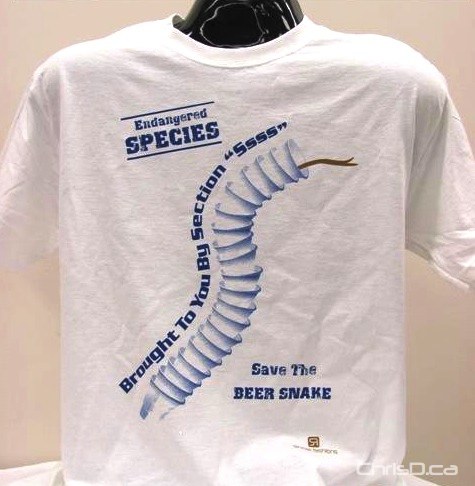 The infamous beer snake that grabbed the attention of football fans across the country during the first half of the Winnipeg Blue Bombers season may be dead, but it still lives on in the hearts of many die hards.

In early July, fans stacked empty beer cups to form a “snake” that stretched over a dozen rows in Section S at Canad Inns Stadium.

A group of Winnipeggers have since commissioned a designer to produce “Save the Beer Snake” T-shirts.

Cory Sinclair and Mike Krakalovitch, as well as Section S resident Jared Zanewich, are behind the idea, and say they hope to sell enough shirts to make a Section S whiteout.

The beer snake forced management to come out with an updated code of conduct in July, but a football club spokesperson tells us fans are allowed to wear the article of clothing.

The shirt is available in limited quantities for $20 at Sinclair Fashions, 1821 Wellington Avenue, in medium, large and extra large.

Ideally, the guys would like to have the shirt sponsored by a beer company, but no word yet if that will happen.