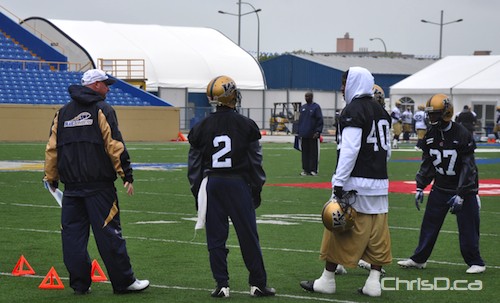 The Winnipeg Blue Bombers added three new non-imports to the practice roster on Sunday, just two days after suffering a 39-28 loss to Hamilton at home.

Kickers Warren Kean, Justin Palardy and Ryan Elaschuk will work to fill the void left by Alexis Serna, after he was cut last week.

Kean is an Ontario native who spent time with the Bombers back in 2008 after being released by the Eskimos. He played one game for the Eskimos in 2007, making three of four field goal attempts.

Palardy comes from Nova Scotia and was drafted by the Hamilton Tiger-Cats in the fifth round (36th overall) in the 2010 CFL Canadian Draft. He appeared in five games with Hamilton this season punting the ball 27 times for an average of 42.1 yards.

Elaschuk is a 24-year-old Winnipeg native who played five years with the Edmonton Wildcats of the CJFL and is the all-time points record holder in the league. Elaschuk was released this year from Eskimos’ training camp, following a stint with the Saskatchewan Roughriders.

During a rainy Sunday morning practice at Canad Inns Stadium (above), head coach Paul LaPolice was making sure the boys were in tip-top shape for their matchup against the Alouettes in Montreal on Thursday (6:30 p.m. CT on TSN).

Quarterback Buck Pierce will not be starting this week, but rather Steven Jyles will be at the helm when the two teams meet on Thursday.