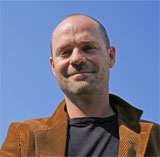 The front man of the The Tragically Hip is coming to Winnipeg as part of his North American tour.

Gord Downie and the Country of Miracles will play the Garrick Centre on Thursday, October 7.

The Grand Bounce is the third solo offering from The Tragically Hip’s lead singer and follows the acclaimed Battle of the Nudes (2003) and Coke Machine Glow (2001).