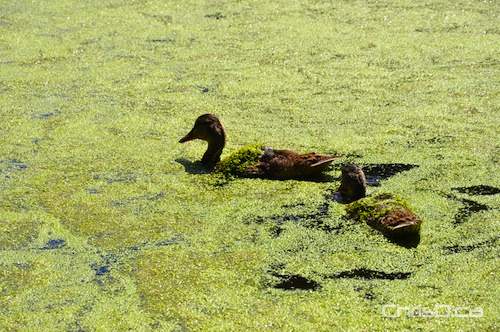 Weeks after the city made it a priority to clean up what it calls ‘duckweed’ from the park, much of it still remains. Ducks and geese are swimming through the slimy residue, and many birds have it caked to their bodies in thick layers even when out of the water.

The only area in the pond where duckweed isn’t present is directly under the water fountain, where many birds have retreated to clean themselves up. The current produced from the fountain moves the layer of duckweed away from under it.

Wildlife may not appreciate the duckweed, but people in the park don’t seem to mind. “It doesn’t smell, so it could be worse,” said Candice Thiessen, who was taking pictures of the ducks on Friday afternoon. “I think it looks pretty. It can’t kill them, can it?” No, and other species living in slow-moving bodies of water where the plant is prevalent actually prefer it. Bullfrogs, for example, can hide out under the duckweed, which provides shade. Another plus is the prevention of algae, which grows when light hits the water. The layer of duckweed prevents this, and other algal blooms, from growing.

“Compared to being covered in oil like in the States, this isn’t so bad,” said Paula Hirsch, referring to the recent BP oil spill, which left thousands of birds and other aquatic creatures dead in the southern U.S.

A city worker assigned to alleviate the problem said it could take several more weeks to significantly reduce the amount of duckweed in the water. After dragging the pond back in July, more of the tiny plant keeps reappearing. The city hopes to have the pond looking up to par by next summer, and new recently-installed aerators should help with that process.