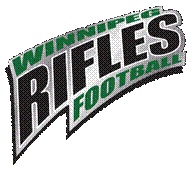 Here’s hoping the way the Winnipeg Rifles played during a weekend exhibition game isn’t a sign of how the rest of their season will go.

The Rifles were dealt a heavy 70-9 (not a typo) beating at the hands of the Regina Thunder in Yorkton on Saturday.

The two teams met as part of a CJFL pre-season game on Saturday at Century Field, where chilly weather conditions weren’t much better than here in Winnipeg.

The Thunder opened the scoring 1:54 into proceedings as Kolten Solomon returned an Andrew Wiebe punt 70 yards to give Regina a 7-0 lead after the Ben Koot convert.

Rifles starting quarterback Ryan Marsch was drilled and fumbled less than two minutes later with Regina recovering on the Winnipeg 2. Mark Coons dashed in for the major on the next play to make it a two score lead.

Liam Dow pulled off a 50-yard run, and then followed up with a touchdown run from a yard out to make it 31-0.

Tyler Viera engineered the Rifles last drive of the day down to the Thunder 18, but an interception put a stop to it in the final minute.

Choe Sesay came up with runs of 25 and 12 yards apiece on the drive to lead the Winnipeg rushing attack, but on this day, the Thunder could do little wrong on the way to a 70-9 rout of the Green Gunners.

The Rifles open the 2010 PFC season in Saskatoon next Sunday afternoon against the Hilltops.

— With files from the Winnipeg Rifles