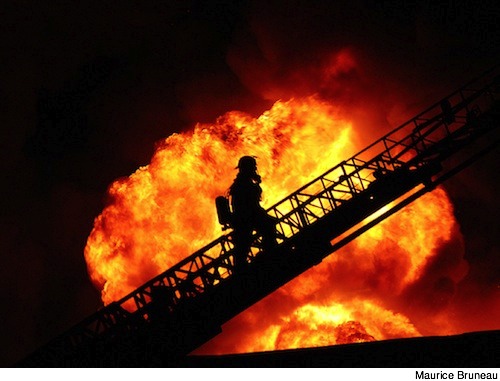 A Winnipeg photographer has received the well-deserved honour of “Photo of the Year” as judged by the International Association of Fire Fighters (IAFF).

Maurice Bruneau is probably best known for shooting the famous black and white photo of Brian Sinclair — the man who died after waiting more than 34 hours in the Health Sciences Centre’s emergency department in 2008.

But Bruneau didn’t win for his work of everyday people on the street. The photo that earned him the award was a Winnipeg fire fighter climbing a ladder during a fire at a roofing company in an East Elmwood industrial park in October 2009. The title of the photo — “Fire Fighters Still at All-Night Blaze” — won first place in the news category for a circulation of over 100,000. The photo in question ran in the Winnipeg Free Press.