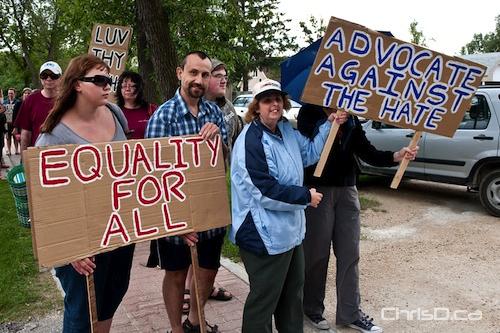 About 100 protesters gathered outside a municipal council meeting in the RM of Springfield Monday evening to protest against the decision to vote down a group home for people living with intellectual disabilities.

The group from People First of Canada created signs displaying such messages as, “Equality for All,” “Love Thy Neighbour,” and “Advocate Against the Hate” to get their message across. They say there is no evidence the presence of people with disabilities has a negative impact on property values, or increases the crime rate where they live.

A home near Dugald, Manitoba was to be rezoned from a residential property to an institution to accommodate the organization New Directions’ plans to make it a group home.

Councillors opposed the idea on August 9 after hearing concerns from many vocal residents in the area.

Residents say they aren’t prejudice to those living with intellectual disabilities, but they would prefer that such an institution not be present in their neighbourhood.

New Directions may file a human rights complaint, or relocate the site of the home to another location.