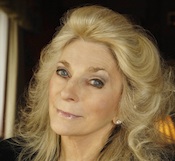 The 71-year-old has over 30 albums to her name and an induction into the Grammy Hall of Fame for her recording of Joni Mitchell’s “Both Sides Now.”

Collins recorded her first album when she was 22 and turned busking in New York City’s Greenwich Village in the early 1960s into a 40-year career.

Collins is currently touring her album Paradise that came out earlier this year. The ten-track record is a concept album about searching for a utopian existence on earth. Opening for Collins is acclaimed pianist and singer-songwriter Kenny White.

Tickets for the performance in the Muriel Richardson Auditorium at the WAG are $42.50 at the Winnipeg Folk Festival Music Store, 211 Bannatyne Avenue, and at Ticketmaster.