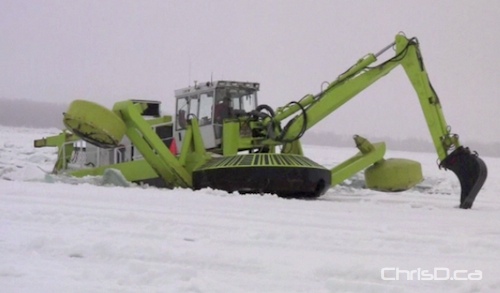 The Amphibex breaks up ice on the Red River north of Selkirk on March 9, 2010 to alleviate spring flooding in rural communities. (CHRISD.CA)

The provincial government is investing to protect homes, farms and businesses throughout Manitoba from flooding with a $17.5 million program to fund flood mitigation projects over the next five years.

The 2010 Manitoba Individual Flood Proofing Initiative includes $9.8 million in financial assistance for the owners to flood proof their buildings and structures up to a maximum total project cost of $100,000. Other flood-protection works that will be supported include constructing private ring dikes, raising structures on earth mounds to the flood protection level and moving structures out of flood-risk areas.

Affected property owners will be responsible for anteing up 14% of the total cost, similar to the 1997 flood-proofing program. The program will be delivered in areas of high flood risk across Manitoba, prioritizing the north Red River area.

Eligibility criteria and timelines for applications will be available in the coming weeks.

The province is also spending $1.1 million to upgrade drainage on PR 224 near the Peguis and Fisher River First Nations to help mitigate the flood risks in those communities.

UPDATE: 12:25 p.m. — The provincial and federal governments have announced further flood prevention funding to the tune of $29.7 million. The majority of funding supports five key infrastructure initiatives including: new hydrometric network infrastructure to improve flood forecasting and emergency flood response, enhancements to provincial flood control works, the addition of gates to the Shellmouth Dam spillway, flood protection initiatives in Melita and the construction of dikes in various flood prone communities north of Winnipeg.

The two levels of government also announced $10 million in joint funding towards road improvements, including seal-coating several kilometres of highway pavement per year, over four years. The combined investment total is over $39 million dollars.