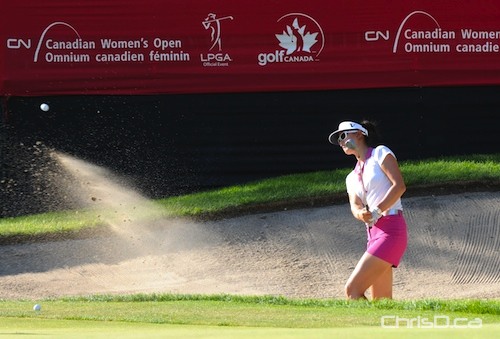 Michelle Wie hits her ball out of a sand trap at the CN Canadian Women's Open at the St. Charles Country Club in Winnipeg on Thursday, August 26, 2010. (RON CANTIVEROS / FILIPINO JOURNAL)

Twenty-year-old pro golfer Michelle Wie has been the talk of the town ever since arriving in Winnipeg this week for the CN Canadian Women’s Open. After spending one of her first nights in the city at The Forks, it was down to business on Monday.

Wie was the highlight of the day on Thursday after sinking a hole-in-one on the par-three 11th hole at St. Charles Country Club.

After a successful Pro Am that drew about 10,000 spectators earlier in the week, tournament organizers are all smiles at the level of fan excitement continuing right through the weekend with mild temperatures to boot.

The Open goes until Sunday.