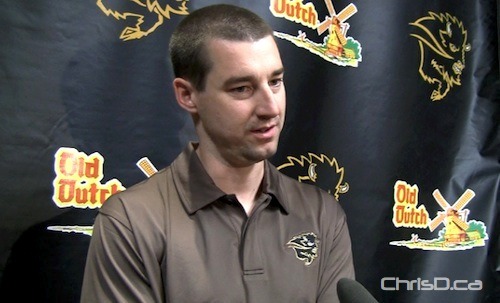 U of M Bison men's basketball coach Kirby Schepp speaks to media during a news conference on Tuesday, August 24, 2010. (CHRISD.CA)

The U of M Bison men’s basketball team will look for redemption in preseason action tonight against the South Dakota State University Jackrabbits.

The Jackrabbits beat the Bisons by over 30 points on Tuesday ending the first of two games 94-60.

Tuesday was the first time in over a quarter century that Manitoba played a NCAA (National Collegiate Athletic Association) Division 1 school at the University of Manitoba campus.

Manitoba had five rookies in the 13 person lineup in game one against South Dakota State. In Tuesday’s loss, fifth year guard Eric Garcia led the team with 12 points and four assists in 27 minutes while fifth year forward Sean Maxwell had 11 points while Richard Reimer and rookie Tanner Draward added ten points. Reimer also chipped in six boards in the losing cause.

Tonight’s game at Investors Group Athletic Centre was originally scheduled for 7:30 p.m., but has been moved up to 6:30 p.m. to accommodate the Jackrabbits’ travel schedule back to the U.S.

Tickets are available at the door for $10 (adults) and $5 for students and seniors.