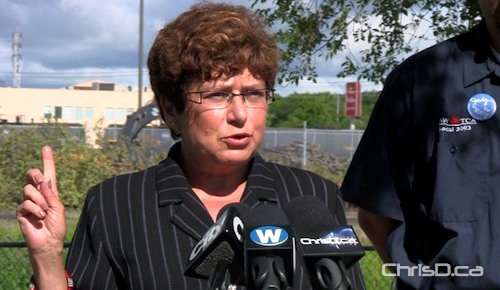 Mayoral candidate Judy Wasylycia-Leis wants more public transparency when it comes to how the City of Winnipeg deals with sewage and water contracts.

During a Sunday afternoon news conference at her campaign headquarters on Portage Avenue, Wasylycia-Leis accused Mayor Sam Katz of looking out for a foreign company’s business interests and jeopardizing the health of Lake Winnipeg.

Freedom-of-Information documents obtained by the former NDP MP show costs related to the secret deal that Wasylycia-Leis says Katz’s office has negotiated with the multinational firm Veolia to oversee Winnipeg wastewater upgrades and operations for the next three decades.

“We’re talking about locking the people of Winnipeg into a secret deal for the next three decades,” Wasylycia-Leis said. “Back-room dealmaking that compromises public oversight of our water should have no place in this city.”

The documents outline a refusal to disclose the simplest of costs to the public in relation to the deal.

“How much will this secret deal cost the people of Winnipeg? Exactly how much control are we handing over to this company? We still don’t know because we have an administration that thinks it’s okay to negotiate secret deals and not tell the public,” she added.

Wasylycia-Leis took the opportunity to pledge to rid City Hall of any secret dealmaking and “blatant lack of regard for water protection” if she is elected this fall.

The civic election is October 27.