Rick Mercer Gets Baseball Lesson from the Winnipeg Goldeyes 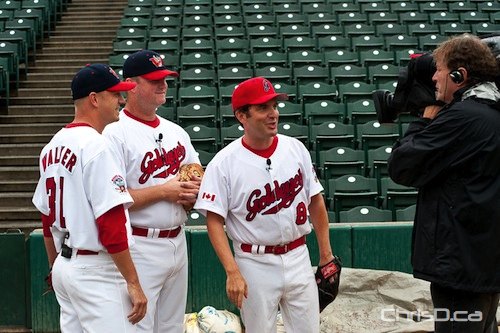 Funny man Rick Mercer invaded Canwest Park on Saturday to try his hand at becoming the next player on the Winnipeg Goldeyes. As you can likely guess, it didn’t go so well.

The host of the popular CBC television show “The Rick Mercer Report” was in Winnipeg with a film crew to learn everything from hitting and pitching, to how the production staff operates during a regular game. Mercer also took part in a sketch Saturday night during the team’s doubleheader against the Fargo-Moorhead RedHawks.

Mercer didn’t select our beautiful city as a backdrop at random — the baseball club contacted the show’s producers about a year ago to persuade them to come here.

The segment is set to air in early October, which will put the Goldeyes in front of a national audience coast-to-coast.

The Goldeyes host Fargo again this afternoon at 1:30 p.m. in their last home game of the season before travelling to Rockford and Schaumburg.