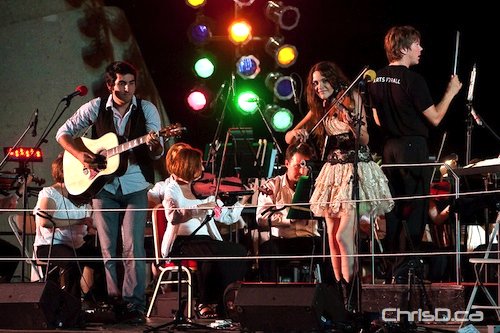 Singer-songwriter Sierra Noble performs with the Winnipeg Symphony Orchestra during the River Barge Festival at The Forks on Friday, August 27, 2010. (TED GRANT / CHRISD.CA)

The first ever River Barge Festival at The Forks is in the books and organizers couldn’t be more pleased. Despite the rainy weather on Saturday, the festival pushed forward as planned, albeit under the canopy to keep the performs and their equipment dry.

Thousands of people made The Forks a stop on their schedules, as the five-day event kicked off on Wednesday at the Historic Port in downtown Winnipeg.

One of the most anticipated performances — at least according to those in attendance — was the Winnipeg Symphony Orchestra on Friday evening. The WSO performed along with local singer-songwriter Sierra Noble, following Chic Gamine and Papa Mambo.

Sunday was all about the families, as Al Simmons hosted the day and introduced a number of acts to entertain the young ones, including Rocki Roletti and the Junior Noodle Wave, Jazz On Wheels and Fred Penner. The Manitoba Theatre Centre also put together a play that told the history of Manitoba in a mere 45 minutes.

The floating barge concert series was put on in celebration of Winnipeg being named the Cultural Capital of Canada for 2010.