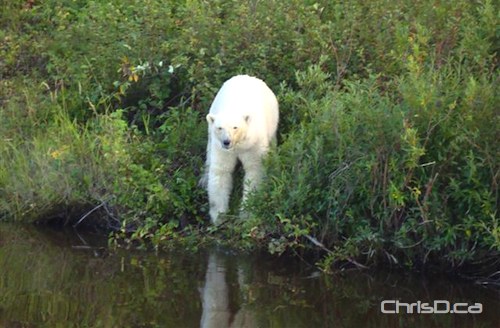 A polar bear wanders near the river in Shamattawa, Manitoba on Sunday, August 29, 2010. It's the first time people living in the town have seen the animal in their neck of the woods. (RCMP HANDOUT) 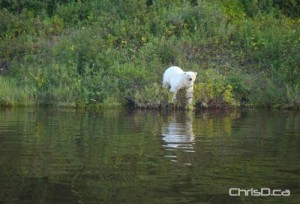 People in Shamattawa had the unusual sighting of spotting of a polar bear in town over the weekend.

RCMP say at around 6:30 p.m. on Sunday, a lone polar bear was found swimming in the river.

Police launched a patrol boat to monitor the animal until darkness fell, when it left the area.

“The bear appeared to be young, but was quite a good size,” said RCMP Sgt. Noel Allard in a release. “The people in the community were very exited to see it.”

Elders in the area told RCMP that this was the first time seeing a polar bear in the area.

Manitoba Conservation was notified and will be watching for the bear if it returns.

No injuries or damages were reported in relation to the bear sighting.