Jetty Road, Keith and Renée Perform at the Pyramid (PHOTOS) 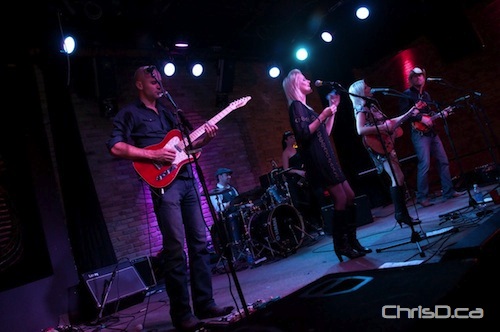 Australian country music stars Jetty Road were in town Wednesday night for the first of two shows at the Pyramid Cabaret.

The band is no stranger to Manitoba, having previously performed at Dauphin’s Countryfest in 2008. The country music “Group of the Year” is made up of identical twin sisters, Lee and Paula Bowman, and Julian Sammut and Simon Ross.

The crowd at the Pyramid was pumped for a midweek performance, which also featured Manitoba’s own Keith and Renée as a closing act. The duo is most recently known for singing the theme song “Good Year” for Manitoba Homecoming 2010

You can still catch both Jetty Road and Keith and Renée tonight at the Pyramid Cabaret beginning at 9 p.m. Doors open at 8 p.m.

Tickets are usually $10, but the cover charge has been waived for tonight’s show.