Home » News » Roughriders Getting Their Own Commemorative Loonie

Roughriders Getting Their Own Commemorative Loonie 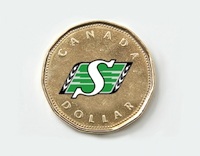 Winnipeg Blue Bomber fans likely won’t be swarming the Royal Canadian Mint on Friday when a new one-dollar circulation coin commemorating the 100th anniversary of the Saskatchewan Roughriders is made available.

Following the official launch of the Mint’s newest commemorative circulation coin in Regina later today, the Mint will be hosting a coin exchange for the general public at its Winnipeg boutique at 520 Lagimodiere Blvd.

The public can exchange any regular one-dollar coin for a Roughriders coin starting on Friday from 9 a.m. to 4 p.m. The exchange will continue Saturday, Sunday and Monday, September 6 during the same hours.

The coin above is only a rendering and not what the actual coin may look like.

About 3,000,000 of the coins will be circulated throughout the country. That’s a lot of Rider pride!