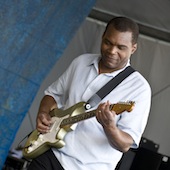 Five-time Grammy Award winner Robert Cray is coming back to Winnipeg in support of his record This Time.

The American blues guitarist last performed in Winnipeg back in 2007.

Tickets for the October 3 show at the Garrick Centre go on sale at 10 a.m. on Saturday through Ticketmaster for $37.50.