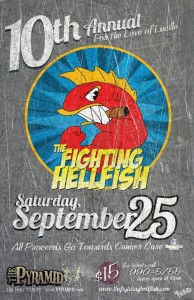 A benefit social in honour of a woman who died of cancer nearly a decade ago has been raising money to fight the disease that took her life ever since.

Lucille Smith passed away in 2001 after a seven year battle with breast cancer. On Saturday, September 25, the 10th Annual “For the Love of Lucille” benefit social will help support the fight thousands of people in Manitoba are going through.

Over the past 10 years, the charity in Lucille’s name has raised over $100,000 for CancerCare Manitoba and the Victoria General Hospital.

Tickets to the benefit social at the Pyramid Cabaret are $15 and includes good, silent auction prizes and special guests. Winnipeg 70s band The Fighting Hellfish will provide entertainment for the evening.