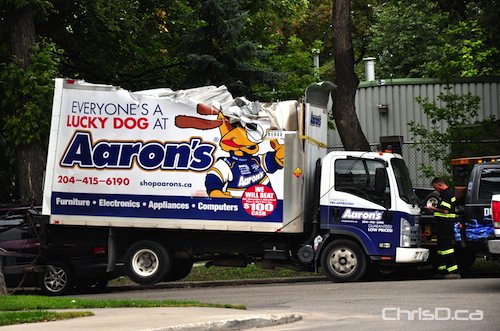 A delivery truck is prepared to be towed away Tuesday afternoon after becoming lodged underneath the Midtown Bridge on Assiniboine Avenue. (MARC EVANS / CHRISD.CA)

The driver of a delivery truck was taken to hospital Tuesday afternoon when his vehicle hit the underside of the Midtown Bridge.

Traffic was reduced to one lane on Assiniboine Avenue during the noon hour while emergency personnel tended to the scene.

A Public Works employee says the city inspected the bridge for structural damage, but did not find any.

The injuries of the driver are not known at this time, but they do not appear to be serious.