Home » Photos » Manitobans Get One Last Taste of Summer

Manitobans Get One Last Taste of Summer 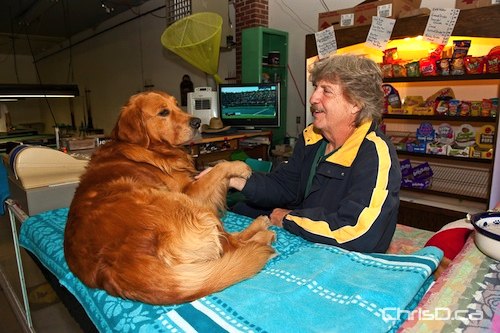 Winnipeg Beach Boardwalk Station owner Ken Muracz hangs out with his golden retriever, Zak, on Saturday, September 4, 2010. Many stores in the resort town north of Winnipeg closed up for the year last weekend. (TED GRANT / CHRISD.CA)

With the last long weekend of summer now behind us, Manitobans took the opportunity to venture out to cottage country and beaches one last time.

Southern Manitoba was graced with favourable weather to say the least, which had popular Interlake destinations like Winnipeg Beach and Gimli buzzing with activity.

Further south, people were taking in the St. Malo Summer Festival, which began Thursday and ran through Sunday in the little town just past St. Pierre-Jolys. The Manitoba Homecoming 2010 sponsored event drew thousands to watch the popular soap box races and baseball/slo-pitch tournament. On Sunday afternoon a unique contest called the “Goose Dump” took place. For the sake of not wanting to get into too much detail, organizers sell off 50 squares in a grid placed on the ground. If the goose happens to do its business in the square you put your money on, you end up winning. One local spectator familiar with the activity referred to it as “goose poop gambling.” Sounds lovely.

View the photo gallery below from Winnipeg Beach and Gimli.