Stolen and Damaged Leo Mol Sculptures Back on Display 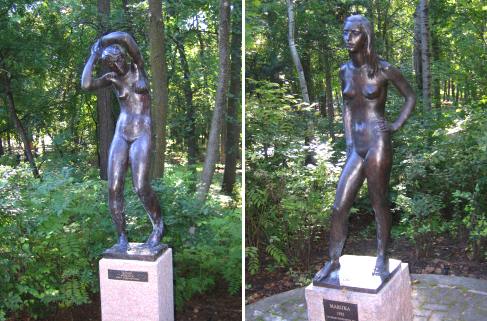 The Bather (left) and Marijka have returned to the Leo Mol Sculpture Garden in Assiniboine Park. Bather was stolen June 28, 2010 and Marijka was tipped over the same evening. Both sculptures required repair. (HANDOUT PHOTOS)

Two popular sculptures from the Leo Mol Sculpture Garden are now back on display after one was stolen, and the other one damaged back in June.

“The Bather” was stolen on June 28 from the Assiniboine Park garden, but returned by police less than a week later. “Marijka” was tipped over the same evening.

“Thankfully, the statues were able to be completely repaired and even received some extra well- deserved TLC,” said Margaret Redmond, president and CEO of the Assiniboine Park Conservancy. “We’re thrilled that the public can once again view the beauty of the garden in its entirety.”

Since the incident, security at the park has been increased.

Police haven’t made any arrests in the case and continue to investigate.