Home » News » Truck Convoy Travelling with a Cause

Truck Convoy Travelling with a Cause 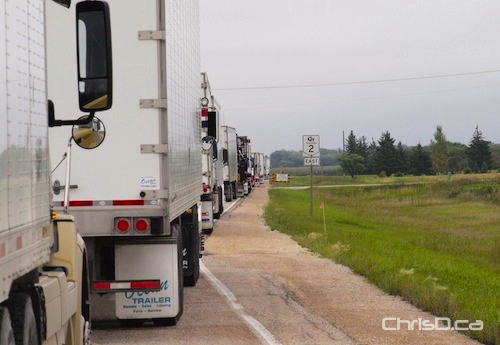 A line of semi-trailer trucks sit on Highway 2 near Oak Bluff, Manitoba on Saturday, September 12, 2009 waiting for the World's Largest Truck Convoy to begin. (CHRISD.CA)

Plan on being on the Perimeter Highway Saturday morning? Stay clear of the big rigs.

The World’s Largest Truck Convoy in support of Special Olympics will make its way around Winnipeg’s outskirts beginning in Oak Bluff at 11 a.m. The counterclockwise trip is an international project of the Law Enforcement Torch Run (LETR) working in conjunction with members of the trucking industry.

The convoy will make one big loop of the Perimeter before returning to Oak Bluff, where the truckers and other participants will be welcomed by Special Olympics athletes, family, friends, colleagues and law enforcement personnel for lunch.