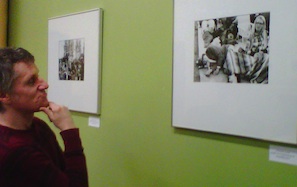 A photography exhibit in the Exchange District opened on Friday featuring the work of five youth, all new Canadians who took part in the 2010 Winnipeg Folk Festival’s Guest for a Day program.

The youth are affiliated with Graffiti Art Programming Inc., a non-profit community youth art center dedicated to the creation of a safe, accepting environment for the development of artistic expression using art as a tool for community, social, economic and individual growth.

The exhibit is open to public viewing during events at the Folk Exchange, 211 Bannatyne Avenue until October 21.

← Previous: Engage with the Spirit of the Prairies Next: Manitoba Contributing $10 Million to Métis Fund →
Tags: Winnipeg Folk Festival