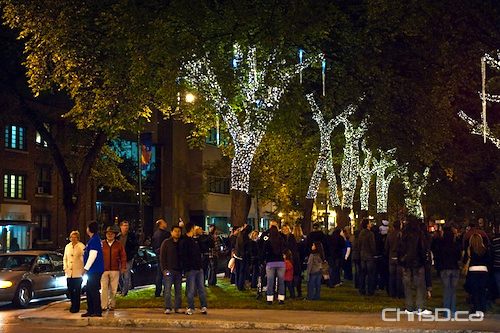 Downtown was the centre attraction Saturday and Sunday as thousands of people took in the Lights on Broadway Lighting Design Competition, the Big Dance on Broadway and the Taste of Downtown Winnipeg.

Three lightning design companies from California, Quebec and right here in Winnipeg had the honour of wooing the crowd by decorating a stretch of Broadway with lights. The elm trees were illuminated at 9 p.m. on Saturday and again on Sunday with an official lighting ceremony in Memorial Park.

The winning design was judged by a jury and ballots cast by the public and will be awarded a contract to put up a permanent light display on Broadway. The winner is expected to be announced today.

On Sunday, it was all about fitness, as the 10+10 event took runners from Memorial Park to Assiniboine Park and back again. Awards for the 10 mile and 10 km race were handed out later in the morning at the Memorial Stage.

Following 10+10, cyclists took part in the second annual Ciclovia on Broadway. Streets were blocked off to accommodate biking enthusiasts and free programming was offered from 11 a.m. to 7 p.m.

The flurry of activity was touted as “Five Events, One Weekend” and was phenomenally put on by the Downtown Winnipeg BIZ and generous local sponsors.