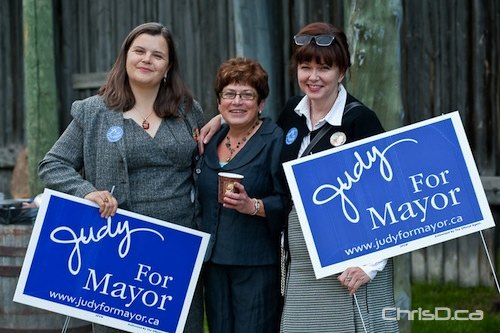 Judy Wasylycia-Leis (centre) with supporters Louise May and Lisa McGifford during the Judy for Mayor fundraising concert at Fort Gibraltar on Wednesday, September 15, 2010. (TED GRANT / CHRISD.CA)

Mayoral candidate Judy Wasylycia-Leis is taking a similar approach to the new Winnipeg police slogan, by committing to work on relationship building if elected.

The former NDP MP and MLA sparred off against incumbent Mayor Sam Katz during an afternoon debate Thursday — the first of seven before the election.

“Our city urgently needs to rebuild the partnerships with the federal and provincial governments that led to projects like The Forks and MTS Centre, investments in downtown renewal, money for forward-looking projects like rapid transit and tens of millions of dollars to support our local neighbourhoods,” Wasylycia-Leis said in a release.

Wasylycia-Leis brings up rapid transit as a project Katz has flip-flopped on when it came to funding, calling it “unacceptable given the city’s soaring infrastructure deficit and unmet local needs.”

“Picking phony fights with other levels of government is a cynical political strategy that has only put future funding at risk,” she said.

Wasylycia-Leis says partnerships like the Winnipeg Partnership Agreement that drove $75 million in funds for high-priority projects have now expired without plans to negotiate a renewal.

She adds the only way to get things done for Winnipeg families is by strengthening partnerships and relationships with other levels of government.