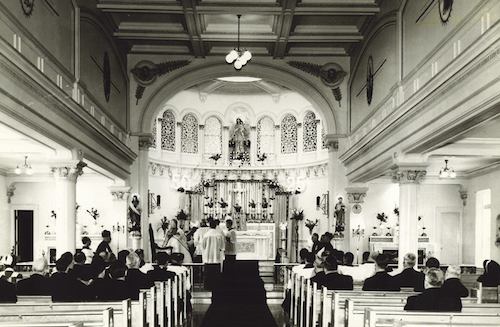 St. Luke's Chapel in the Misericordia Health Centre will close on Friday. (FACEBOOK)

A historic Winnipeg chapel is closing its doors after 94 years with one final mass on Friday morning.

St. Luke’s Chapel is transitioning to an interim chapel as part of Misericordia Health Centre’s redevelopment project that will see the aging Maryland and Sherbrook buildings demolished in phases and replaced with a new health complex housing an expanded Eye Care Centre of Excellence and PRIME, a health centre for seniors.

“It’s time,” said Father Vince Herner, Misericordia’s Director of Spiritual Care in a statement. “While the current chapel is a beautiful and inspiring place, its age is evident, and safety concerns about the wooden structure have been long held. For now, the entrance of the chapel will be retained as a small prayer room for patients visiting outpatient clinics.”

A formal transfer of St. Luke’s Chapel will begin at 10:15 a.m., followed by a traditional procession of the chapel’s religious items.

A short reflection and mass led by the Archbishop of Winnipeg, Most Reverend V. James Weisgerber will follow.

Open houses at both chapels will take place immediately following the mass with photo displays and a memory scroll of the chapel’s history.

Redevelopment plans include attempts to salvage the historic frescos and stained glass windows for incorporation into the new chapel of Misericordia’s health complex.