Home » Photos » Players Hoop It Up in NBA Basketball Competition

Players Hoop It Up in NBA Basketball Competition 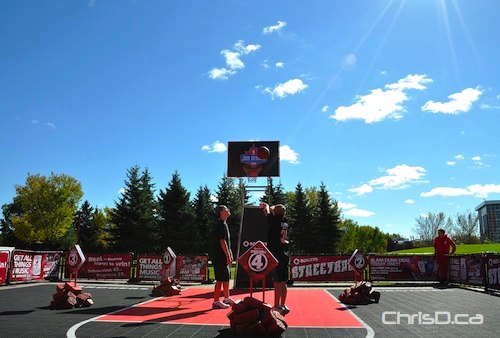 Amateur basketball players hone their skills at the NBA Jam Session at The Forks on Saturday, September 18, 2010. A 3-on-3 tournament is being held today from 9-5 p.m. (MAURICE BRUNEAU / CHRISD.CA)

Young basketball players of all skill levels tried their hand at dunking, dribbling and making trick shots Saturday in the NBA Jam Session.

The two-day event at The Forks attracted Thaddeus Young from the Philadelphia 76ers, Buckets Blakes of the Harlem Globetrotters and talented dancers from the Toronto Raptors Dance Pak.

Teams will hit the court today in the 19+ division 3-on-3 tournament to compete for a spot in the National Finals in Toronto. The top two teams will end up being showcased during a pre-season Raptors game during half-time at Air Canada Centre.