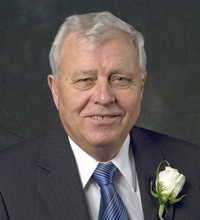 Councillor Harry Lazarenko will not be seeking re-election in the Mynarski ward in the upcoming civic election.

The veteran councillor made the announcement Monday, thanking friends, colleagues and family who have been by his side for over 30 years during his career of public service.

Lazarenko’s political future has been uncertain the last few months after he suffered an aneurysm in May.

“I want to express how difficult a decision it was for me to vacate the position I have held for so long , but it is time that I put my health and family ahead of politics and enjoy time with my loved ones, especially my wife Judy, who has always been very supportive of my choices,” Lazarenko said in a statement released by the mayor’s office.

Lazarenko also thanked his longtime executive assistant Chris Hurley and Mayor Sam Katz, wishing him the best in being re-elected on October 27. “I know Sam won’t stop until he gets the job done,” he added.