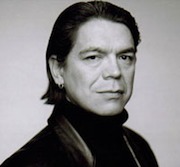 The Manito Ahbee Festival is right around the corner and will include a familiar face as host this year.

A multimedia marketing campaign will launch this week and features a contest for fans to vote online for their favourite “Lorne character.” Cardinal will either be dressed as a rocker, hip hop artist or country star when he appears on stage to host the show, which will be broadcast on APTN.

The five-day festival from November 3-7 will celebrate and showcase Aboriginal music, art and culture. Seventeen Manitoba artists and industry professionals are nominated for awards.