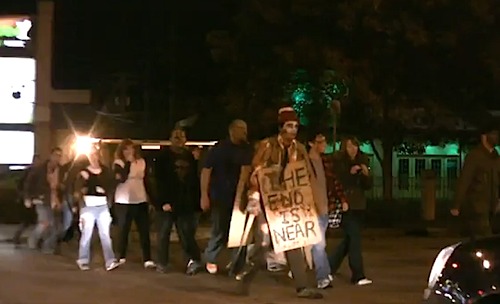 A group of zombies are getting together on Sunday, October 3 for a photo shoot to promote the upcoming 2010 Winnipeg Zombie Walk.

Last year’s Zombie Walk (video) caught many people off guard when a large group of concealed individuals spread out throughout downtown and began climbing on vehicles.

Organizers are hoping for at least 50 zombies to come out to the parking lot of the Royal Albert on October 3 to get their pictures taken. The material will be used to promote the walk, which takes place on Saturday, October 23.

A second photo shoot will follow on the 3rd for anyone interested in getting their photo taken in a more interesting setting. Organizers have rented a warehouse to shoot in just down the street from the Albert.

Those planning to attend can RSVP on the Zombie Walk Facebook page.