Cohen on the Big Screen in Digitally Restored Documentary 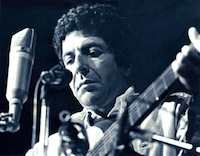 The University of Winnipeg will screen a digital restoration of a lost documentary of Leonard Cohen’s 1972 European tour on Tuesday, October 5.

“Leonard Cohen: Bird on a Wire” will play at the Eckhardt-Gramatté Hall at 7 p.m. and include performances of 17 classic songs.

Director Tony Palmer will be in attendance to introduce the film.

Tickets are $15.00 plus tax at the Winnipeg Folk Festival music store, McNally Robinson Booksellers and Into the Music.