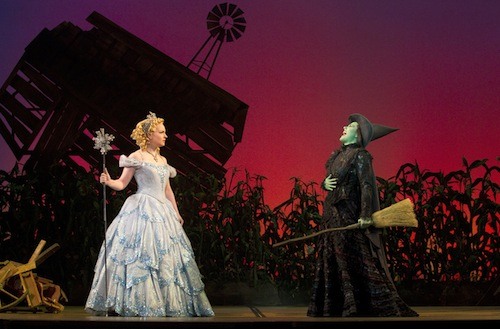 Vicki Noon and Natalie Daradich, part of the cast of "Wicked," playing August 24 to September 4, 2011 at the Centennial Concert Hall. (© JOAN MARCUS / HANDOUT)

A new Broadway blockbuster musical will make its Winnipeg premiere at the Centennial Concert Hall on August 24, 2011.

“Wicked” is the untold story of the witches of Oz and based on the best-selling 1995 novel by Gregory Maguire.

Long before Dorothy drops in, two other girls meet in the land of Oz. One — born with emerald green skin — is smart, fiery and misunderstood. The other is beautiful, ambitious and very popular. Wicked tells the story of their remarkable odyssey, how these two unlikely friends grow to become the Wicked Witch of the West and Glinda the Good.

Wicked has received rave reviews by Variety and The New York Times and continues to thrill audiences around the world. There are currently seven productions of the musical touring the globe, including a Dutch-language production to launch in 2011.

The musical will conclude at the Concert Hall on September 4, 2011.

Reservations for groups of 20 or more are now being accepted by calling 1-800-889-8457. Tickets for Wicked vary in price depending on performance, seat location and date of purchase and start at $64.00. Individual tickets will go on sale at a later date.

Other stops on the Western Canadian tour include Vancouver, Calgary, Edmonton and Saskatoon.