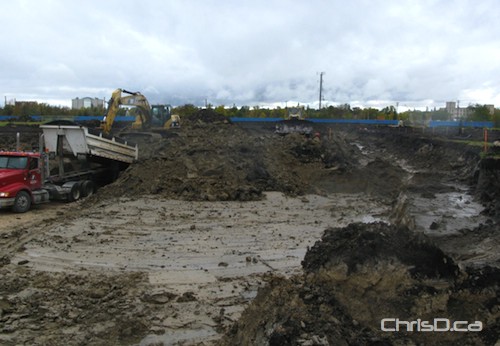 Excavation work at the site of the new football stadium at the University of Manitoba began August 4. (CRESWIN PROPERTIES / HANDOUT)

Excavation of the stadium bowl at the site of the future Winnipeg Blue Bombers’ home is well underway, developer Creswin Properties says.

Dirt at the University of Manitoba site has totalled 1,400 truckloads since excavation began last month, making the bowl about 12 feet below grade. When complete, the stadium will have a 25-foot bowl.

Creswin says a foundation permit to allow piling to proceed was awarded September 8.

The final stadium design has yet to be revealed, which has sparked controversy among Fort Richmond residents. The Fort Richmond Coalition wants to see a final draft that will include a partial rooftop to alleviate noise during concerts and other events. Cost overruns has forced Creswin to take a second look at its design, which still needs approval from investors if major changes are made.