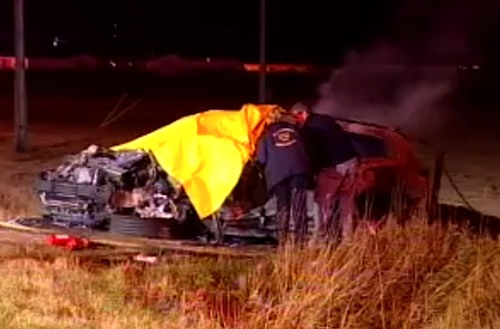 Three people died in this crash on the Trans-Canada Highway in Headingley on October 12, 2007. (GLOBAL TV)

Seven Manitoba men will be awarded with the Medal of Bravery after assisting in rescue efforts to remove people from burning vehicles in Headingley nearly three years ago.

On October 12, 2007, Sergeant Joseph Penman, Roland Bouliane and Abebe Yohannes rescued two people who were trapped inside the burning vehicles. Other passing motorists tried frantically to put out the fire inside one vehicle, but the flames spread quickly and the dark smoke made it difficult to see inside. One of the men broke the rear window, pulled a little girl from the back seat and brought her to safety. RCMP Constable Alfred Lavallee and the other rescuers again tried desperately to reach the two other victims inside, but were driven back by the heat and flames. Meanwhile, Blair Hockin, Herman Zarbel and Master Warrant Officer Hamish Seggie ripped out parts of the dash on the second vehicle to pull out the driver who was trapped beneath the debris. They removed the victim, moments before the vehicle became engulfed.

Warrant Officer Shaun Spence of Ottawa and Major William Robertson Green of Moose Jaw also assisted in rescue efforts and will be honoured.

Wayne and Serena Adair were killed in the crash, while their nine-year-old daughter was rescued. The driver of another vehicle also perished.

RCMP report the SUV the Adairs were driving in was hit by an oncoming vehicle heading in the opposite direction that had clipped a taxi and lost control, sending it over the median and into westbound traffic.

Governor General Michaëlle Jean will award the medals to the men at a ceremony in Ottawa to be held at a later date.