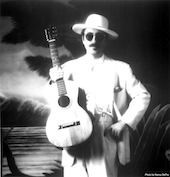 The Winnipeg Folk Festival will present the Canadian folk legend with the 2010 Artistic Achievement Award at the festival’s annual Winter Wassail.

Redbone began his career in the mid-1970s playing covers of songs he chose to honour. He soon developed his own his brand of jazz infused blues and started writing originals and now has 10 albums to his name. Redbone has appeared as a musical guest on “Saturday Night Live” and “The Tonight Show with Johnny Carson.”

Besides receiving the 2010 Artistic Achievement Award, Redbone will perform at the upcoming Winter Wassail, which will be his only Winnipeg performance.

The annual Winter Wassail is a medieval-themed fundraising event in support of the festival’s Education and Outreach programs. Tickets for the event at the Winnipeg Convention Centre are $125 and are on sale now by calling 231-0096. A partial tax receipt will be provided.