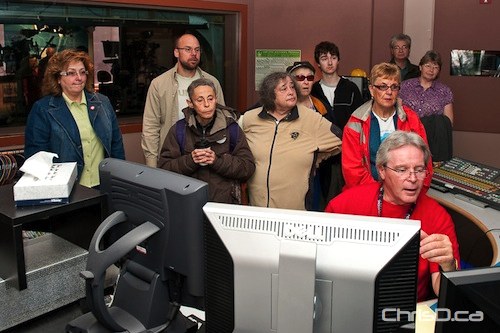 Viewers get an inside look at CBC's command centre during a tour through the broadcaster's studios at 541 Portage Avenue on Saturday, September 25, 2010. (TED GRANT / CHRISD.CA)

To coincide with Culture Days, CBC Manitoba held an open house on Saturday to show viewers its TV and radio operations.

A long line formed outside CBC’s Portage Avenue headquarters, as fans of the federal broadcaster waited patiently for a look inside.

The CBC I-Team was on hand to greet those who came by, including several personalities from some CBC hit shows. Amanda Lang from “The Lang and O’Leary Exchange,” Brett Wilson from “Dragons’ Den,” Sook-Yin Lee from “Definitely Not the Opera (DNTO),” Ron James from “The Ron James Show” and the full cast from “Men With Brooms” signed autographs and posed for photos Saturday afternoon.

Viewers also had a chance to meet their favourite on-air personalities, like anchor Janet Stewart and meteorologist John Sauder.

Viewers get an inside look at CBC’s command centre during a tour through the broadcaster’s studios at 541 Portage Avenue on Saturday, September 25, 2010. (TED GRANT / CHRISD.CA)