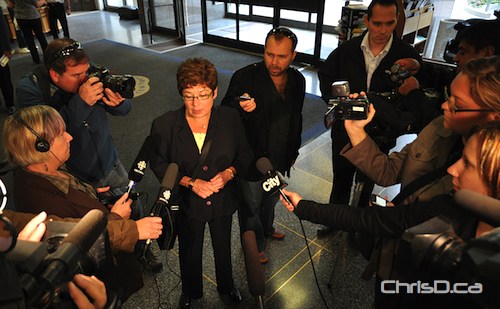 Following the roll out of text messaging to engage young voters, mayoral candidate Judy Wasylycia-Leis is once again reaching out to the younger demographic with an upcoming fundraising social event at the Pyramid Cabaret.

“Get Your Vote On” is on Thursday, October 14 and will include Magnum KI, Enjoy Your Pumas, LeBeato and Noma Sibanda & the Guerrillas of Soul.

“We’re excited to throw our support behind a candidate who understands that joblessness and economic despair among youth in our most impoverished neighbourhoods are a systemic cause of the chronic violence that continues to plague our city,” said Noma Sibanda of the Guerrillas of Soul. “Judy is a candidate who already includes the youth voice.”

Winnipeg DJ’s Co-OP, Hunnicutt and many others will spin.

Tickets are $10 at the Judy for Mayor Campaign headquarters at 650 Portage Avenue, Urban Bakery and at Into the Music. Showtime is 8 p.m.